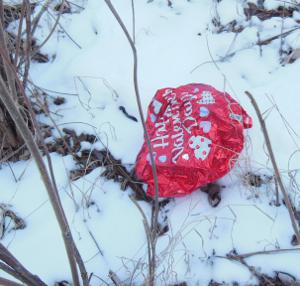 Have you ever used Biaxially-oriented polyethylene terephthalate? Sure, you have! But, you probably know it as the brand name of Mylar.
It was developed in the 1950s by those great chemical folks at DuPont that also brought us neoprene, teflon, kevlar, tyvek, and panty hose.

Mylar has many uses, but the one we're most likely to see is the cute, shiny, fun party balloon. Mylar balloons can be any shape and color, are lighter than latex balloons, and they keep the gas trapped longer. That's great for parties - BUT it means they can float longer and cover more distance if their ribbon breaks. And, break they do!

On every single one of my long hikes so far, in Arizona, Minnesota, Wisconsin, Virginia, and now Florida last month, I have recovered mylar balloons far out in the wilds - a couple stuck in a cactus, one in a soybean field, four floating in a swamp, and others. I thought I was just unlucky to find this many, but it turns out balloon litter is a Huge Problem that effects the environment, animals, our electric grid, and maybe even air travel. I had no idea. 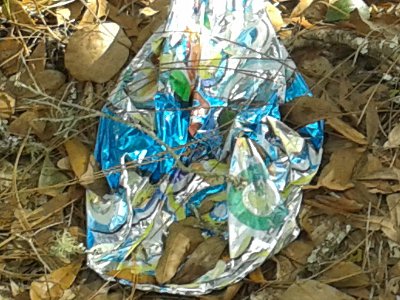 A few years ago, I attended a big Scouting event with my sons at a local amusement park. It was a big deal. To kick off the event, the local council arranged to have a couple thousand helium-filled, latex balloons released. I was not aware the release would happen until I saw the mass of color floating and spreading into the sky. It was sure colorful, but I just thought, "Really?" I was surprised that our Boy Scouts council would be doing such a thing with our emphasis on conservation and outdoor ethics.
All those balloons would disperse far and wide, but I knew they would eventually come to earth in thousands of places across the miles. All balloons that escape into the wild are a problem, regardless of the material used to produce them.

In 1986, Cleveland set the world record by releasing 1.5 million balloons at BalloonFest. It caused air traffic problems and interfered with a helicoptor rescue of two men that ultimately drowned. The organizers expected the balloons to float far away (becoming a litter problem someplace else), but weather caused them to stay right in Cleveland, creating a huge mess.


OK, you get the idea that I feel balloons are floating litter, bad for the world, and possibly dangerous. So, what should we do about it? Well, the two main uses for balloons are Parties and Balloon Releases.

As someone trying to be a good steward of the earth, I do what I can to follow the seven Leave No Trace principles, one of which is Dispose of Waste Properly. I will not purchase helium-filled balloons. I pick up balloon litter I find. I encourage others to explore options to using balloons.
It seems to me to be an easy decision to use an alternative to balloons for decorations and events.