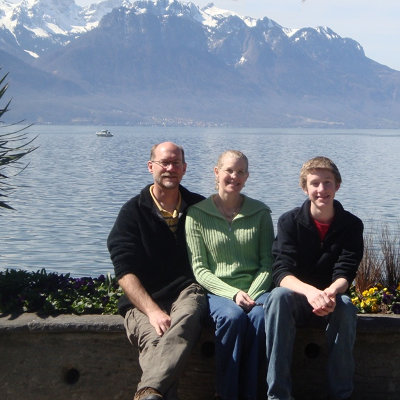 The real fun begins tomorrow! We're off on that old jet airplane for two weeks of visiting, exploring, and hiking in France. Being the free spirits that we (Hiking Dude, Mrs. Dude, and son) are, we have plane tickets, a rental car, and that's it. No idea where we'll stay even our first night. But, our backpacks are packed (sort of) and we've got a credit card, and Mrs. Dude bought a book about France yesterday, so I think we'll be ok.

This is us on our trip to Switzerland and France seven years ago. I hope this adventure is as fun as that one! I'll blog if we see anything worth reporting :-) and if there's internet. But, it's not like France is a wilderness like, say Montana, Idaho, and Washington.

Speaking of MT, ID, and WA, that's the next big thing for Hiking Dude when we return. Around July 1, I'll be heading to Glacier National Park with my son to find the Pacific Northwest Trail eastern terminus at Chief Mountain. Once we find it, we'll be walking west un the PNT until we either find vampires or run out of land to walk on.

The PNT is NOT the PCT!!! The Pacific Crest Trail runs north-south through CA, OR, and WA while the Pacific Northwest Trail runs east-west through MT, ID, and WA. Plus, the PCT is 2600 miles but the PNT is only 1200 miles. The PNT bounces along just south of the Canadian border until it his Pugent Sound, then crosses the Olympic peninsula (passing Forks, WA - the vampire village) and ends at Cape Alava on the coast.