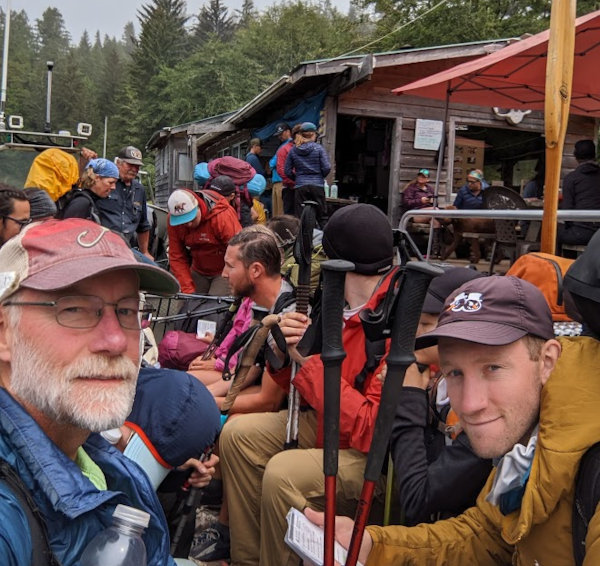 My long hike of the Pacific Northwest Trail was the most isolated, as we met only a handful of other hikers over 1,000 miles. The West Coast Trail is definitely NOT isolated in that way! Of all the trails I've hiked, the WCT easily had us encountering the most hikers each day, even more than the Appalachian Trail.

Not many people actually hike long distances. The 2,200-mile Appalachian Trail only sees around 4,000 hikers attempting thru hikes each year, and the 1,200-mile PNT has more like 70 annual thru hike attempts. The 50-mile WCT gets from 5,000 to 7,000 thru hikers each year. So, from a hiker per mile per day perspective, the WCT is VERY CROWDED!

We met a group of 8 men, a family of 5, many couples and threesomes, and a few solo hikers - all going in the opposite direction. It seemed that we always met them either in the middle of a muddy bog, or halfway up or down a series of ladders. Of course, this makes sense since these are choke points that take extra time and effort to get past. 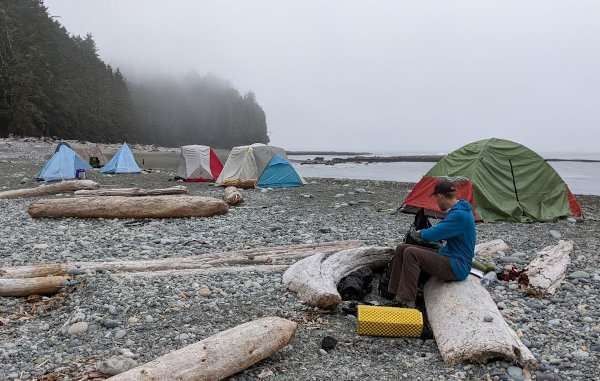 Even more so than on-the-trail, you'll notice the people at campsites. Since nights are spent at designated sites on the beach, those 30 people fill up the areas with a couple dozen tents. When you're used to plopping your tent down on any flat spot out in the wilderness, this is a big change.

We tended to start hiking early in the morning which meant we were often one of the first groups to arrive at campsites. Rather than taking a prime spot with easy access to the bear boxes, outhouses, water source, and trailhead, we set our shelters up far away from where we envisioned the majority of others would like to camp. This is just trail etiquette to allow those that may of had a hard day hiking to find a nice place.

We also preferred to be apart from the noise and activity around the many campfires that were built each night. For the most part, it worked out well, but I expect we would not win any "life of the party" award.

Of the 100+ people we interacted with on the trail, there were none that were anything but friendly and considerate. Maybe it's a Canadian thing, but I got no 'entitled', 'weird', or 'sketchy' vibes that sometime crop up on other popular trails. We did meet a few folks that made the trek special... 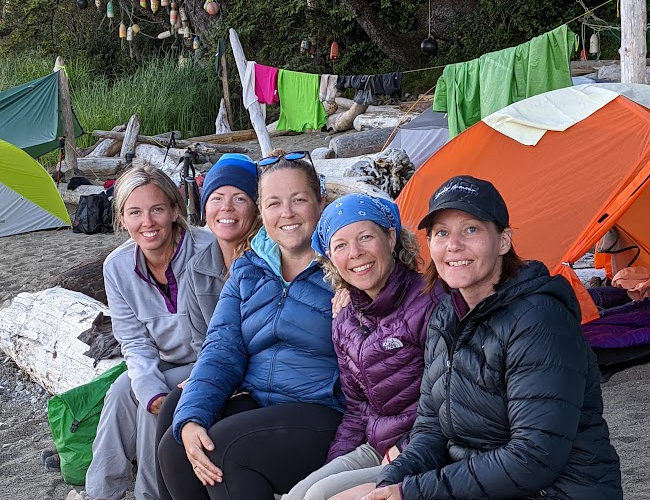 The ladies above (Erin, Candice, Amanda, Shannon, Ericka) followed the same itinerary as us. They did not all hike together through the day, but every afternoon or evening they eventually arrived at camp. Over the days, it was enjoyable to hear about their adventures, including getting lost, bushwhacking, and falling in mud. Pretty much every other obstacle you may hear about this trail seemed to happen to one or another of them at some point, but they persevered and fared as well as most.

One hiking pair that rode the shuttle bus with us was a father and young son. They were excited to hike, but after our boat ride with them across the Gordon River, we never saw them again. We got word on the second day that the dad had a boot blow out on the first day so they had to turn around and leave - hopefully, he fixed it and did a reboot (get it?).

Others from that original group would leap frog with us over the next days. One Canadian fellow had hiked the trail a couple times and shared a lot of information from his past experiences. 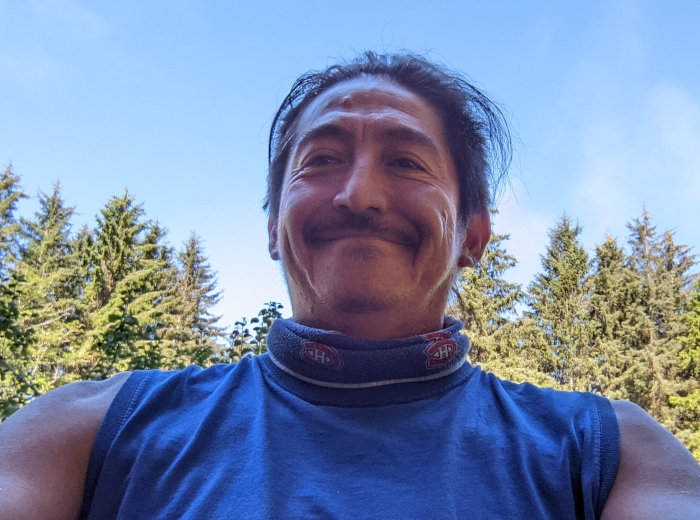 Upon reaching the northern terminus early in the day, we were greeted by a Trail Guardian, someone that maintains the trail, helps hikers, and shares local culture. My wife asked him if he'd take our group photo which he eagerly did, and surreptitiously got a couple of himself in as well. This is Kevin, whom I later learned is pretty well-known on the trail since he's been working on it for over 23 years now.

This year, Kevin has been sharing salmon with hikers that arrive at the terminus on Thursday afternoons - we missed it. He is also part of a crew responsible for the northern 25KM of the trail - there are 3 such crews, breaking the trail into three 25KM sections. It was a joy to chat with him for quite some time while he sharpened his chainsaw.

There were more women than men hiking the WCT during our time on trail. The last person we met on trail was at about kilometer 3, and she was a spitfire just heading south all by herself. All smiles, enthusiasm, and energy, with a small, light gear setup. I have no doubt she cruised down to the Gordon River without a care.

I noticed the diversity of hikers, too, and it was refreshing. On the long trails I've hiked, the typical hiker is a lean white male. The WCT is exceptionally different from that with a wide range of skin colors, body sizes, ages, and even languages. I heard English, French, Japanese, and Spanish (I think).

It seemed to me that the general 'vibe' on the WCT is more easy going than on longer trails. There was not a drive to cover many miles. Taking time to experience the widely ranging trail conditions and varying scenery was a nice luxury. Having a few hours to lounge around after hiking a few miles each day gave it more the feel of camping than hiking. I suppose the shorter trail length and commitment of just a week rather than a month or more had a lot to do with this.

@Doug - Well, thank you for taking the time to read it and comment. :-)  Fortunately, there was no need for any WFA on this trip.
Ask a Question